“See there… the way you ask another question after I’ve already given you my answer.”

That was the best response I could come up with in conversation with my son the other day. 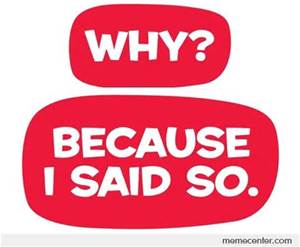 I refused to debate further because my decision was made.  So yes, I gave him the silent treatment.

As immature as some say the “silent treatment” is, I have a slightly different take on it now.

Granted, ignoring someone out of spite is not healthy, however, neither is arguing a point in which a decision has already been rendered.

For years, “because I said so” was a sufficient response to my children, but until a few days ago, I’d allowed them to” wear me down with words.”

Before, I’d gotten tired of it and tried to slightly different approach to the battles, “Because God said so!”  Boy did that open a can of worms!  It turns out that if you’re going to use that, it would help if you are actually adhering to those same principles yourself first.

I mean, imagine bringing up the importance of honoring your parents to get this response:

How dare my son “get me” with scripture when clearly I was trying to “get him” first?

Can I be real people?

This was me that day…

I was wrong that day…and I hated it….I mean who wants to be proven wrong by a kid? Especially your kid?

But oh how I love that God is my Strength.   I’ve had much more resilience with my son’s war of words lately.

Regardless, we’re both stubborn.

I mean the apple fell from somewhere, right?

With that in mind, I think my son would be a great attorney.  Yet, even attorneys have to comply with the judge’s ruling!

So in our most recent debate, I chose to ignore my son’s whining…oops…I mean request.

And get this…not an ounce of guilt…

Because God had to humble me with His silence.

“Didn’t I tell you, if you have faith you will see the glory of the Lord?”

“How much longer will I have to be with you before you believe?”

“Okay I need one more…don’t be mad, but just one more confirmation!”

And then there was nothing…no word…except one’s leading back to completing the vows I stated…I mean everywhere all over the bible…who knew the bible was so full of places to remind you of the things you say you are going to do for the Lord, but then get fearful and try to take it back….I digress…

I know now God just wants me to trust Him with my future.

A bit of a challenge for a control freak, wouldn’t you think?  Challenging yes, but definitely doable. I’m already reaping the benefits.  It’s made me eager to sit still and wait for the next thing He has to say.

…a discipline, I hope and pray will also be evident in my own children in time.  Yet, until then, I’m learning to endure the questions, seek God for the answers, and chose to be silent when necessary.