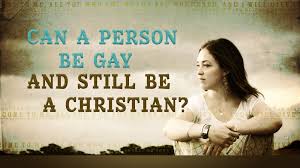 Note…this is from the heart…hip…on my mind…not really editing this so be warned…No room for a bunch of funny pics or quotes….just real talk…that’s it…

It seems a fairly innocent question.  Yet, one with a plethora of possible responses…the easy out would be to choose yes or no, but even that isn’t so easy anymore is it?  For the most part, to answer the question whether a Christian can be gay or not, one would have to inevitably dissect the meanings of at least two words in the question.  Even then, those words, “Christian” and “Gay” are subjective to societal norms.  Norms…it seems that there really aren’t any of those anymore either. Alas, I must agree that with the turn of events occurring within the US in recent weeks, my mind and heart is indeed grieved.  As I’ve mentioned in prior articles, the inevitable civil war that seems to have erupted in our midst came to a head with all that’s happened.

I found it beneficial to my heart and mind to fast from social media for a while. I had great intentions.  I removed the apps from my smart phone and refused to log in on my pc.  Yet, I underestimated the extent the recent news of the Supreme Court’s decision would impact me. So I received a text message from a friend who has been delivered from the grip of homosexuality asking how I feel about the Court’s decision.  I’d forgotten it was expected during my voluntary period of remission.  I thanked him for sending me the heads up and silently before responding further, grieved for our nation.  I regressed. I started to voice my opinion on that day, but perhaps writer’s block had me bound.  I couldn’t pen anything positive…anything plausible…anything useful in my opinion.  So I did nothing that day.

Instead, I waited. I waited to login to anything.  Concern for a loved one who’d been directly impacted by the deaths in South Carolina, I did manage to go online later that night, however. Maybe even that was technically the next day.  Who knows?  Sleep has escaped me for a few days.

I was bombarded with rainbows and insults.  Rainbows and taunts of “love winning” and again I grieved wondering had love really won anything?  Every picture I saw was vulgar and I silently wondered why was it so necessary to display this sin so flippantly.  Why was this area of opportunity one the church had all but sat down when confronted with it?

I was never angry with the court’s decision and I’m not angry with those persons involved with their decision to be a homosexual either, but I am grieved.  I’m saddened that it seems that this and the shootings the week prior or further evidence of our depraved societal standards…then I wonder is there even a standard any more. I watched Madea’s Witness Protection the other day and the remark was made by Tyler Perry’s character aka Madea “It’s a church, of course it’s safe” or something like that in response the apprehension of the Caucasian attorney who asked whether it would be safe for him since it was a predominantly African American church.  I couldn’t help but note the horrible irony.

I also was told days prior to the court’s determination that a 16 year old boy is now homeless because he decided to “come out” to his parents who are professing Christians. Pain has a tendency to make people do extreme things.  Again, at this news I was grieved.  I thought how not long ago, if a girl told her parents that she was in love with a young man at 16, it would have been chopped up as “puppy love” or “confusion”  The parents might have stepped back and allowed the “phase” to take its course knowing that their teaching would allow her to make the proper decision in time.  Nevertheless, they would not have gone through such drastic measures to prevent the two from being together.  In retrospect, the attempt is largely counterproductive.  While there are exceptions to this…what one thought was “real love” was never a reason to “not love” the one caught in the crossfire of a mistake….well, aside from Shakespearean tragedies…all fictional accounts but eerily similar to the more pressing issues in our reality today…

Perhaps society refuses to know how deceitful one’s heart can be?

For the brief time I spent on Facebook last weekend, I saw one post state  “religious hypocrites chose to forgive a murderer last week, but now condemn the court’s decision.”

With that some conservatives would love to say “no” to all of the questions above while some liberals would be in favor of the court results…yet some conservatives would also be in favor of the confederate flag being removed while others wanted this obvious emblem of racism to stay in place because of “tradition.”  Oh how we mirror the Pharasees and Sadduccees in the church now…so quick to point the finger, yet act as if we have arrived on so many other levels….

Some things are still certain amid all the chaos of our day.  God doesn’t need walls to talk to know what’s going on!  Jesus Christ paid for all of our fallacies with His priceless blood so our judgment of others still needs to be one from a position of real love without compromising what the Bible says about this and every issue that attempts to maligns the will of the Almighty.

God is not mocked and while He is indeed patient, He will judge the land and the people who inhabit it. For the record, that includes how we Christians treat one another as well.

So back to the question at hand, Can a Christian be gay?  Why bother to answer at all? Consider this one instead: Can a gay person be saved?

3 thoughts on “Can a Christian be Gay?”