It’s been said that opposites attract.  However, more often than not in relationships you typically tend to attract who you are!

I know some of you might be shaking your head in protest but I did the same before I was able to swallow that giant pill too so hear me out.

Think about it.  If you have been one of those sisters who has had the misfortune of being involved with a young man who is jealous, insecure, or seemingly void of emotion, I challenge you to take a good long look in the mirror. What vibes are you emitting to make a man like this even come your way?  I’ll tell you…jealous, insecure, and emotionally numb ones.

Guys, I haven’t forgotten you either!  Say you keep running into women who seem to have the full package on the outside: beauty, brains, and about handling their business only to find out that they’re really needy, controlling, and have a low self-esteem.  Sound Familiar?

Well brothers, I invite you to flip that visor down and look at who you too are attracting.

So ladies and gentlemen, if this seems to be the hand you’ve been dealt lately, might I suggest you do an inventory on yourself, heal the wounds of your past, open yourself up for positive results in your future, and get you attitude in check…in essence… 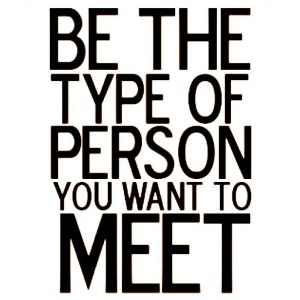 The bible says in Amos 3:3 ” Do two walk together unless they have agreed to meet? (ESV)

This clearly means if two people aren’t going in the same direction, there’s no way that they can walk together.

Now of course we meet people all the time in passing and though they may seem to be going the opposite direction, you should not necessarily disqualify them.  Instead, the question you must entertain in such an encounter is whether where this other person is headed will be mutually beneficial or mutually detrimental…whether it’s worth the risk of change…or better yet…whether you are willing to change directions for the better.

I admit I like things the way I like them.  I get used to something in a certain order and I shy away from change because there’s something comforting about knowing what to expect.

Well, if I’ve learned nothing else from the ghosts of my past relationships, it is that you really can’t have a clear set of expectations when it comes to love…that is other than what the bible describes of it.  After all, you may judge the outward appearance, but God judges the heart.

I mean you have control over one person in every relationship that you will ever be a part of…whether that is with family, friends, or romantic ones.  You are in charge of yourself!  As much as I would love to be able to write the script of my love life like I do in my fiction pieces, I have to understand that God alone knows how my story ends. He alone directs our paths and the paths of those He’s intended to plug into our lives to meet that lingering desire of our heart.

…Notice I didn’t state to be the missing piece of our puzzle or some other euphemism indicating that we were somehow incomplete without “The One” at our side. That’s because we’re not! The only way that we as children of God are incomplete is if we neglect to accept Christ as our Savior.  I know it seems easier said than done, but it is true.

God’s shown me over the past year how much I need His presence to give me the wisdom to make the right decisions with regard to love, life, and lust!

Yes, I said lust…obviously it would seem as a Christian that dispelling lust would be a no brainer…but not the case if you’re unaware of the actual definition of the word itself.

Yes, lust of the flesh does not inherently mean sexual perversion or fornication alone.   By definition lust also means having a strong overmastering desire or craving for something or someone.  Now in my book that’s right up there with idolatry!!!  Don’t believe me…let check its definition out…hmm

So I have been set in my ways for a while with regard to romantic relationships and guess what I’ve discovered?

So yes, I too have to be open to change.  And though I’ve come to realize this notion kicking and screaming, I am thankful My Father is coaxing me out of that old mindset.

While some opposites attract in terms of complimenting the other, too many opposites actually repel one another so the bottom line is if we are willing to say what we want in a mate  perhaps out main focus should be on being real with ourselves in the process.

For instance, a spiritually and emotionally whole person is not going to tolerate the foolishness of a broken person one moment longer than it takes for that person to show his or her true colors.  It’s simply unattractive.  Likewise, a broken person who doesn’t admit or realize the extent of his or her brokenness will continue to pursue another broken person in an ill-attempt to fix themselves while believing his or her efforts will fix that person. The result is chaos and more wounds on both sides.  It’s a lose/lose situation. 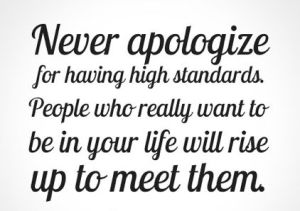 Along the way, we are given choices.  Those choices can either lead to the love of our life or a disaster.  So as much as I hate to admit being wrong, I realize the peace I’ve gained in acknowledging God’s way as right is a much better deal.

So since I attract who I am as my history in some strange ways have shown, I’m no longer settling for “looking the part”, “playing the role” or even “trying to fix what only God can.” Rather, I think my time and energy is best spent on being the one and leaving the rest up to God.

I am a woman with womanly curves and convictions so it’s only natural that my musings predominantly address a female audience.  So while I welcome all visitors, please understand that since everything here is based on my own personal experiences and observations, it is entirely possible that my perspective appears slant.  Regardless, gentlemen, I’m clearly not gender biased!  Rather, this is just an area where my take on the raw truth about relationships and divinely-inspired wisdom intertwine.  That said, guys and gals, I encourage you to comment, question, and challenge me as you deem fit.  After all, it’s my prayer that this section do just that for you!