I’ll edit this later…just flowing from the heart…

I used to say “I didn’t have a good example when I grew up.”  It was my excuse.  I suppose I felt less guilty for my own shortcomings as a parent by blaming my mother for the woes I’d experienced.  Yet, now I realize how untrue that statement was.

There were good days with my mother. That truth has allowed me to now cherish those good times I shared with her more.

No, my mother didn’t teach me to cook or sew.  Experimenting with Betty Crocker recipes and Girl Scouts did that.  Yet she allowed me to play in her hair and play dress up in her clothes when I was little just because she could.

While I’m aware of the times I’ve missed the imaginary mark of motherhood, I simply refuse to demonize myself or my mother for what either of us lacks because I know God makes no mistakes.  While we cannot choose our family members, He chose them long before we were ever conceived.  Now I can say that I am so grateful for the gift He gave me in my mother and as I type these words I understand why saying goodbye isn’t as hard as I might have thought it would be.

I received a call after midnight from my brother.  I was asleep so I wasn’t aware of it until about 6 am.  He’d left a message, but somehow before I listened to it, I already knew what he struggled to say those few seconds the machine allowed.

Mama passed away not a half hour before he picked up the phone to reach me.

I hadn’t cried in two months over the thoughts of a lost childhood…over resentment of what might have been…I surmised even after hearing the news recorded that I still would not do so.  Yet, when I called my brother back and discussed what was evident and what needed to take place in the coming week, I found my words losing fluency. Choppy and forced, I allowed them to flow…not out of necessity or regret, but joy in her transition.

Last I saw her, she was in pain…yet still able to smile when she recognized her likeness standing over her. As a child, I’d always been called her shadow for two reasons: I was always two steps behind her and the main differences between us visually were time and complexion…I prayed then that her pain would cease…knowing that mine had already. I am indeed grateful for the time I’ve had both as a child before things seemed to have gone awry.

Before that time, I’d told a friend that I’m choosing to remember the good a while ago, but in reality, at the time, I couldn’t stop myself from only remembering the bad.  I was in a rut and I allowed that to dictate my life for a while…for too long…so long that my own role as a parent had begun to wane.

Having never earned a driver’s license, she never allowed that deficiency stop her from taking us with her every Saturday somewhere…to the movies…to the fair…to the mall…downtown…to the Orpheum–Mama, I want to sing at 6 years old-my love for music was ignited– to see plays because she wanted to make sure my brother and I were “cultured.”

I used to think the reason she had us taking lessons for violin and cello,  Spanish, computer, and even tap after school was so she could get a break, but I understand now that she wanted only to ensure that he and I couldn’t be denied one later.

I have a new appreciation for Ode to Joy!!!

I still remember the red booths at Woolworth’s we’d claim and the flavor of the buttery kernels that seemed popped just for us.  They would melt in your mouth.  Back then a dollar could stretch much farther.

Although she had her bachelor’s in education, she opted to teach us more at home instead of others’ children in school.  She chose to work only part-time for many years and was always there when my brother and I arrived from school.  Single motherhood was worn well on her in those early years…those years I had taken for granted as I grew because for some reason she and I became distant.

Anger took over where love never meant to leave off…I couldn’t understand why it seemed she loved the “little me” so much, but hated what I was growing to become.

I realize now that what I deemed as hatred was just not so.  Rather, her fear of not being enough fed her fury.  Her fear that someone would hurt me as she’d been hurt consumed her. I didn’t know it initially that she’d been taken against her will.  A fit of rage spilled those details and gave me a clue.  Still, at that age, I couldn’t understand.  I didn’t try. I had never known anyone to have been raped before so there was no way that I could relate. Instead, I filed it along with the other displaced memories I’d vacated years ago.  A chance encounter with a photo album would reveal more of her puzzle without anyone overhead saying a word.   Back then, “issues” weren’t discussed so they were held in with massive consequences.

The result- an inevitable implosion or explosion…there were many casualties…but I’ve considered even those the result of involuntary manslaughter now.  Eighteen years of solitary confinement was long enough to suffer, to re-group, to rehabilitate a soul.  She too had been bent, infirmed, desperate for relief.

I believe 2 months ago I received that relief…Yesterday, she finally received hers. So while I dab at tears I’d once denied permission to flow, I revel at the cleansing power they possess.  My joy had indeed been renewed.

My Heavenly Father knew the day would come when I would finally realize the gift He provided me. She did the best she could…

She nurtured the love of words in me long ago.  I remember I denied the desire to write because even at 7 years old, my strong will fought for independence.  I wanted to do my own thing.  Yet, the more I tried to distance myself from what she had already claimed of me…a poet…a writer…I fell back into the comfort of this calling…words…I escaped through the words of a story…I calculated the words from another’s mouth…I practiced over and over until my penmanship was perfected because I loved words and the way they took a life of their own on a page…my mother was a lover of words too I suppose.  Although she’d often comment how her writing was intolerably cruel for the reader to decipher as the scribbling she owned resembled a foreign language, she still fostered a love of them by quizzing my brother and I every chance she got.  She’d read to us often.  My choice was to have the books read at least twice before I could go to sleep. She always happily obliged.  Only later would I realize why she did it anyway despite how tired she had been of the story itself and how exhausted she’d been herself.

I had planned to see her yesterday, but…

Just but…the excuses don’t matter now…I know I’ll see her again…I’m glad that I understand God’s plan and that I don’t have the guilt of “what if” to deal with anymore.

So even now, I choose to honor her by the good she did, she was, and the good she intended.  There’s no need to say goodbye so I’ll just say, “See you later, mama!” 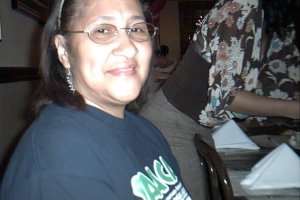 Gone for now, but never forgotten!