“Because I love you”

It was a simple response. One I received a little over a month ago, but also one I wasn’t ready to grasp at the time. It wasn’t in response to a “why” question; rather to a “how” one. Not long ago I found myself in tears sitting in my bed surrounded by darkness crying out to God barely above a whisper…”How are you able to forgive me so quickly Lord?”

I’ve always prayed for God to allow me to love as He loves and to forgive as He forgives, but that night I was my own opposition.

I know I heard it distinctly. My answer came in waking. I’d done something the other night I shouldn’t have. I’d let the “sun set on my wrath.” I was angry and I couldn’t understand why I had to let it go….so I held onto it.

Hours later, my frantic actions led me still to a place of bewilderment. I knew God loved me, but until I fully opened my eyes the next morning, I wasn’t able to see His point. I sought to be that “good” mother who disciplines righteously and who was strong enough to withstand the drama of a teenage son and preteen daughter.

I sought to train them in the way they should go but somehow I departed. That morning much like the hundreds before it, I felt hopeless as a single mother. I knew I couldn’t do it on my own.  This week’s bible study was the confirmation that yes, there are just some things a mother can not teach a son! Only who could address my plight.  Now that I’ve attempted to man him up so much…I forgot I was originally called to be the nurturer.

When the transition occurred, I’m not sure. Maybe it was when I looked up one day and realized my son had finally hit a grow spurt.  Yes, that had to be when because every since that moment, it seems I’ve been the one with growing pains…. No better yet, perhaps it was when at my daughter’s last physical the doctor acknowledged she had begun developing already and that I needed to brace myself for monthly attitude adjustments…but I’d already been adjusting to her growing ‘tude already!

However, despite all my ranting and frustration, I never realized that my prayers for “them” to act right were so far from what they really needed of me.

This morning I realized why it seemed my prayers for them to get it together had been held up.

I hadn’t had it together.

Sure, I learned over the years how to fake it well in public, but other than God, no one knows the real me better than my children.  Yes, they were there throughout many of the trials I faced and conquered with God’s help because many times they shared it involuntarily.

I was told that they were anointed early on.  They are. I know this now. I’ve known it all along I suppose, but the past few years have shown me a side so contrary to these blessings that the woman I see in the mirror most days refused to believe.

But who was to blame?

Where that 11 year old was who choreographed the morning of the performance a praise dance to J. Moss’s God Happens that grown men couldn’t imagine the same?

Where was that innocently wise little girl who once chastised me when I’d clammed up about how much I knew about the word of God for fear of appearing like a Jesus freak at a Young Adult function some years back? 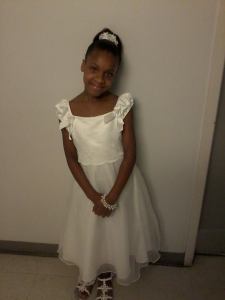 I’d recalled a bible study series that my pastor taught a few years ago reflecting the life of God’s esteemed servant Eli. Until that teaching, I had no idea how similar my life was to his…. a public success and a private failure.  I was convicted then that things needed to change, but I allowed duty to take precedence.

I grasped the courage to let go of the excessive obligations, but initially my motive was still selfish. Sure I really needed to rest, spend time in God’s word, and nurture my children, but I really wanted to date and spend time alone.

I was so backwards! That backwards thinking led  to my own discomfort. Instead of nurturing like I’d done in years passed, I got busy handing out rules that I passively enforced.  This morning, God showed me why things had gotten so hard. I’d only partially obeyed His command.

So I’ve been forced to reconsider my original question.  Though I can’t seem to wrap my mind around the response, I’m now able to understand with my heart how God can be so gracious with me time after time.  So the next time my children disobey my instruction, I no longer have to ponder why I should forgive them or how I can muster the will to do it.  I’ll just remember it all goes back to “because I love you.”