“I’m just letting you know that if I get suspended from school on Tuesday, it’s for a good reason.”

Granted, that is not exactly the greeting I’d hoped to get from my 17 year old son who’d been driving me “nuts” with the way he’d been “flubbing” up his grades lately…

However,  yesterday I knew I needed to listen and say nothing.

So I did and he continued.

He began, “Okay, there’s this dude I know…he doesn’t bother anybody…he rides the school bus with me…Well, we wore a wig to school…and…well, he’s confused…Anyway, he wore a wig to school and they suspended him for nothing so the whole upcoming senior class is planning to purposely disregard the school’s dress code in protest of his treatment. They can’t suspend everybody!”

He continued “I mean, I don’t condone his lifestyle, but he didn’t do anything wrong so mama, I’m gonna wear a “wife beater” and I’m gonna sag on Tuesday in protest!  So when I get suspended, you can’t say it wasn’t for a good reason”

Hmmm…a good reason…that got me thinking again about all the questions I’ve asked of God.  I was always told of the “good” that would be revealed.  I admit some of those goods have yet to manifest in my life, but given those I have experienced already, I’m yet hopeful.

I imagine that my son assumed that I would have been upset with him for his premeditated rebellion, but I wasn’t.  I was proud.

I was proud because not long ago the first thing he mentioned when he arrived at the performing arts school was that there were a lot of “confused” students and he immediately wanted to go elsewhere.

However, after a while he realized that these students were not much different than himself. I shared with him then he was called to minister to them.  He shrugged it off and I almost forgot about it myself until I saw the smile in his eyes when he mentioned what he was going to do on behalf of his comrade.

My son then went on to say that he was more upset with the faculty because they all walked by the young man laughing at him while he was in the office.  He even mentioned how one of the security guards called him a f*#%t-I can’t even bring myself to type the word.

I can only imagine how ostracized the boy might have felt. 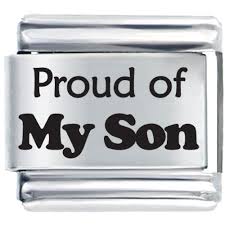 I am most proud of my son because he has learned to see this young man, though “confused” as he put it, as God sees us.  I could say that my words of wisdom helped him reach the point of his decision yesterday, but I know that it was the Holy Spirit. Recco is willing to sacrifice himself for the wrong done to another.

Considering the times this year I’ve been tempted to assume my son was possessed (teen-attitudes-who needs ’em), I could have easily dismissed his decision to purposely get suspended for this “good reason” as reckless.

Yet, I can’t help but smile knowing my son is getting a bit more like Jesus everyday in that he too has an abundance of grace for the gay life.

10 thoughts on “Grace for the Gay Life”